During Holy Week of 2001, he was hospitalized with pneumonia. Whenever he was in the hospital, the caregivers became frustrated as he would not sleep but two hours in any 24-hour period. He would call a spiritual child and say things like “Go to my library, to the 2nd bookcase to the left of the office door, the fifth shelf up, the 4th book from the left, it is green and 5½ x 8”, titled …, and bring it to me please.” It was always exactly where he said it would be.

He yearned to return to his monastery. Even after he had a quadruple bypass, although weakened and not fully recovered, after 30 days he vested to celebrate the Divine Liturgy. Someone asked, “Geronda, are you sure you should be doing this so soon?” to which he replied, “Since my ordination, I’ve never gone for more than 30 days without celebrating the Divine Liturgy and I’m not going to let a little heart surgery stop me from doing so now.”

While hospitalized this Holy Week, 2001, on Holy and Great Thursday he penned the following in his notes. 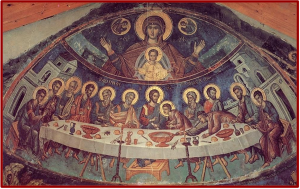 FROM THE MEMOIRES OF FATHER JOHN

At the Mystical Supper the Existing One enters into the substance of bread, the Living Bread come down from above, to feed the sons of Adam, the Second again giving life to the first. Today Life prevails for the life of the age to come, the true Body, broken as the Lamb, upon the altar of the Cross. Today He washes the feet of his Disciples, a preparation for their preaching to the whole inhabited world, that Kingdom not of this world, the Paradise of Edem, the River of Fire, the Cloud, the Pillar of Fire, the Rock, the passing dry-shod, the sign on the homes whereby the first-born are saved from death, the unblemished Lamb, the Way, the Offering and the One offered. Today the Good Shepherd feeds the flock with Himself, he gushes forth both blood and water, shed for the life of the world. Rejoice, Orthodox believers, God, with us, has revealed Himself unto us. Joy returns in fullness and power. Death is despoiled and is mocked by his Victory over death. All creation is renewed by the Creator with purified senses, O ye faithful, let us hasten to the heavenly Jerusalem to worship his betrayal, cross, and tomb where the Noble Joseph has set a guard. Hades trembles at this sight, at the Descent of the Logos bearing flesh, at the Power of his presence. Mankind from Adam heard the Good News, mankind is renewed and healed from the ancient malady! Today the wax melts before 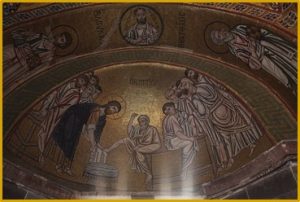 Mosaic of the Washing of the Feet, Monastery of Hosios Loukas in Boeotia, Greece, north wall of the Katholikon narthex.
Photo by Hans A. Rosbach.

the fire, today death is no more, today mankind is set free – Passover – free from all bonds, fetters, chains, constraints, sorrows, sighings, sicknesses. Adam and Eve dance with all generations of the Orthodox. The Existing One is our food and drink. Receive me today, O Master, into Thy Kingdom.