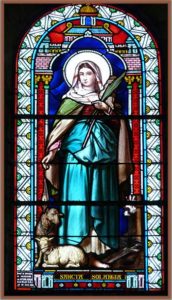 The Holy Martyr Solangia of Berry (880)

Saint Solangia (or Solange) was born to a poor but pious family in the small market town of Villemont, twelve kilometers from Bourges, in France. A pious child, at age seven, she consecrated her virginity to the Lord. As she shepherded, she remained in constant prayer, and was bestowed gifts; some claimed that even her presence healed the sick and cast out demons. Endowed with great beauty, she rejected the advances of a nobleman, Bernard of the Gothic people, the son of the count of Poitiers, who was smitten by her beauty and popularity. He argued with her to become his wife, and finally decided to kidnap her. At night, he prevailed over her on his horse. Solangia struggled violently and slipped from the horse while he was crossing a stream. Vexed, he cut off her head. According …

Saint Nicetius (or St. Nizier de Lyons) was born in 513 at Geneva, then capital of the Burgundy kingdom. His mother was named Arthemia. His father, Senator Florentinus, married and already the father of two children, had refused the bishopric of that city. But the child was destined for the Church, and his mother had the premonition that he would become a bishop. His name in Latin was Nicetius, itself formed from the Greek Νικήτης, the Conqueror, and it was given in French as Nisier, then Nizier.

He was already in the clerical state when his father died, and he remained with Arthemia, his mother. An malignant ulcer on his face put his life in danger,his mother prayed to Saint Martin of tours, who appeared, made over him the sign of the cross, cured him and ordered him to arise. …