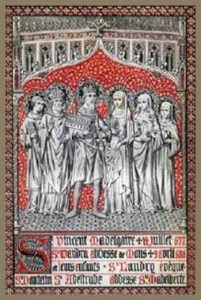 Saint Waldetrudis (or Waltrude or Waudru) was born in the time of Dagobert I, who was king of the Franks from 629 to 638. Fidelity was her virtue as a bride and as a mother, then as a nun and as a hegumeness (abbess). She died on 9 April 688: she had then, between fifty and sixty years. Several decades later, her body was taken from the earth by Saint Hubert, bishop of Tongres, Maastricht and Liège. In 1250, on 12 August, her head was separated from the body in the presence of Nicholas, the bishop of Cambrai. In 1349, on 7 October, her relics were carried in procession in the streets of Mons, in order to obtain the cessation of the plague. Each year, the day after the feast of the Trinity, that is, on Second-day [Monday] after our feast of All Saints, the relics are carried in procession through the city. At Mons, of which she is the patroness, there are four feasts in her honor: on 9 April, the anniversary of her death, on 3 February, the translation of her relics, on 2 November, the anniversary of her glorification, and on 12 August, the separation of her head from her body. The church dedicated to Saint Waldetrudis at Mons is one of the most beautiful in all Belgium.

From the akolouthia of the Saint we learn that her her parents, Walberet, Count of Guînes, and Bertilla de Mareuil, were both glorified as saints. Her sister, Aldegundis, was urged to marry, but she rather walked across the waters of the River Sambre, built a hospital, which later developed into a convent named the Maubeuge Abbey, of which she became hegumeness. She died of breast cancer and she, too, was glorified. When Waldetrudis married, it was to a noble who filled an important function at the court of the Merovingian king. She bore four children of him: Dentelinus, Aldetrudis, Madelberta and Landericus (who became the bishop of Meaux). When their children were of age, she and her husband, Maldegar, entered monasteries. He, with the blessing of Bishop of Cambrai St. Aubert, in the abbey of Haumont, was tonsured with the name of Vincent, and after his repose was glorified, along with all four children.

As for Waldetrudis’ character, she was ascetic, patient, humble, constant in vigils, modest, chaste, generous with her goods towards orphans and widows, giving also for the redemption of captives, for the reception of travelers and pilgrims, cared for the poor, and exhibited sobriety. She was also slandered and endured it graciously. The city of Mons in Hainaut developed around the convent which she founded, which came to be known as Sainte-Waudru. Her relics are a source of miracles and healing.

Let us extol Saint Waldetrudis, the flower of the Cambresis, who became the holy patron of Mons and of Hainaut, praising this summary of all sanctities, since she was perfect as a bride and as mother of four children; with them, her husband, her sister and her parents, she occupies in heaven such a rank in the choir of the saints. Glory to Him who had made them to grow in his love, glory to Him who has crowned them and who obtains for us salvation, by their prayers.

It is not them that say: Lord, Lord, who enter forceably into the kingdom of the heavens; but the holy nun Waldetrudis by her asceticism and by her continuous prayer has found in the monastery the blossoming of her life as wife and as mother in the service of the Lord, exercising as hegumeness on a greater number of children the spiritual motherhood and renewing her conjugal fidelity in the love toward the spouse of her soul, Christ our God.

On 9 April, the memory of our venerable Mother Waldetrudis countess of Hainaut, hegumeness of Châteaulieu and patroness of the city of Mons.

Verses:          Of the holy friends of God in heaven the number has grown
By the marriage and the veil of Saint Waldetrudis.
She rejoined, on the ninth (day of April), Christ in Whom she had believed.

A miracle worthy of Sarepta: on a balance having placed the silver to redeem captives, she saw it to grow, so that it arose the admiration of the servant who would carry this sum and to whom she asked to say nothing during her lifetime.

From ode 5 of the canon

Translated by Schema-Archimandrite John (Lewis) +2007
From the French Akolouthia composed in 2002 by Hieromonk Denis (Guillaume) +2008
Published here with written permission of the author.
Synaxaria augmented by Mother Andrea 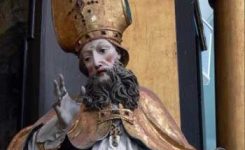 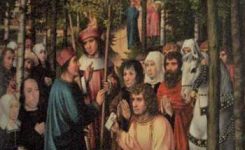 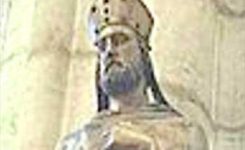 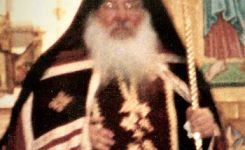 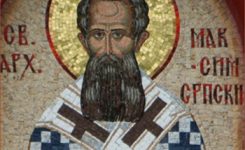 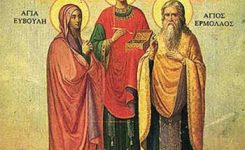 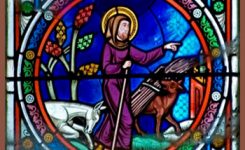 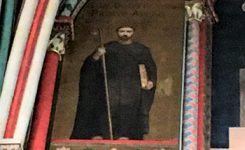